You Are Here:
Home
/
Brian Cook 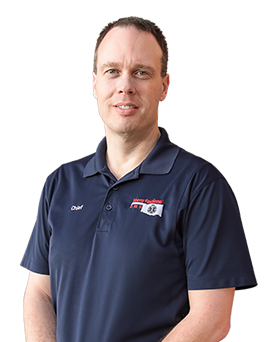 Brian first started in public safety in 1993 as a volunteer firefighter and emergency medical responder eventually obtaining his National Registry EMT license in 1996 and working for EMSA in Tulsa, OK.Brian’s passion for public safety has stayed with him throughout his life working as an EMT and a 911 Dispatcher all while giving back to his community as a volunteer firefighter, EMT and in emergency management.While volunteering, Brian was promoted through the ranks eventually reaching the Assistant Fire Chief position with the Keystone Volunteer Fire Department overseeing an average of forty volunteers and three stations.

Brian began his career with Mercy Regional EMS in 2007 as a dispatcher and was quickly promoted to FTO and then Communications Director.In 2009 he was promoted to Director of Operations, a position he continues to hold.Brian is married to Candice Cook and they have four children.Brian is an active member of Regency Park Church of the Nazarene where he has served on the Church Board and as a junior high Sunday school teacher.